skip to main | skip to sidebar

First, the unbelievably great, and unexpected, news: Fringe was renewed for a fourth season. Not only that, but it also got a full 22 episode order. I certainly wasn't counting on this happening, no matter how fervent the fanbase is or (percentage-wise) what a great bump it gets when the DVR numbers come in. But it makes me happy, as this is the show I most look forward to each week. Huzzah.

Other favorites getting renewals: Futurama, for two more 13 episode seasons on Comedy Central. Justified, which is having a fantastic sophomore season, getting a third. Also on FX, the laugh out loud Archer, getting a third (of 16 eps!). The two NBC comedies I care most about, Parks and Rec and Community, also got picked up. Plus, from the Beeb, we'll get more Luther and more Sherlock - now if only DirecTV will add HD service for BBCA (and AMC, dammit!), all will be right in the world. Usually, renewal season is filled with heartbreak and anger, but hell, looking at that list of shows, I really don't have a lot to complain about (other than not getting any more shaggy dog detective stories from Terriers).

I'm also excited, to various degrees, about some upcoming premieres. Friday, we have Camelot on Starz. This story has been told a billion times, and it seems I've watched most of them. I'll check it out, if for no other reason than "Eva Green as Morgan Le Fay." Sunday, we have The Killing on AMC. It appears to be a well-acted, well-cast murder mystery, with a Rubicon feel to it. I'm okay with that, as long as they stick the landing much better. Over on Showtime, Jeremy Irons headlines The Borgias. The tagline cracks me up: "Sex. Power. Murder. Amen." I'm assuming it's just a church documentary. Doctor Who returns the third week in April, finally airing in relative harmony with the showings across the pond. And speaking of Pond...I'll be in my bunk. Torchwood debuts on Starz in July with another long form story - "Miracle Day," on which no one on earth dies anymore. If it's anything like the stellar "Children of Earth" (which I expect, given the talent in front of and behind the camera), it should be a highlight of the summer.

Then, on April 17th, we have the big one: Game of Thrones on HBO. I was interested, but perhaps slightly skeptical, when I got the first book on my Kindle. But sweet snarky imps, was it good. I'm about a quarter way into the second book now, and have already downloaded the entire series. The log line of "Sopranos in Middle Earth" really is apt. And as much as I love Tolkien, GoT is a much more interesting page-turner. Murders. Wars. Sex. Incest. Betrayals. Mysteries. Terrific world-building. Three dimensional female characters. All without 50 pages written in Elvish about some damned forest or characters changing names nine times.

So, what have you been watching, and what are you looking forward to?
Share |
Posted by Shan at 6:46 PM 2 comments

Labels: Television, There are too many fucking things to label here 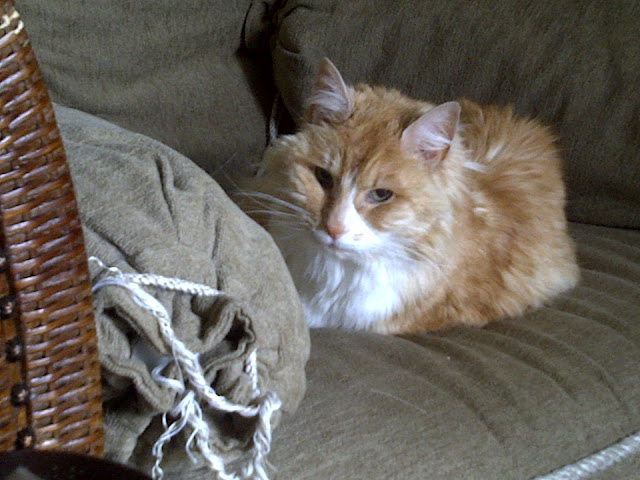 Last night, I had to say goodbye.

In the two weeks since Mulder was diagnosed was kidney failure, I'd given him daily IV treatments, antibiotics, a special diet and a whole lotta love. And in the end, that just wasn't enough.

During that time, he seemed to revert to form and personality, for the most part. He was chatty and affectionate. He was lively and frisky (as frisky as a 15 year cat can get). He was playful, both with me and his adopted sister Willow. He slept on my shoulder, tried to drink my whiskey, wanted to eat my pizza, sat on my laptop and was generally the charming little rogue he's been for a decade and a half.

When I came home from work on Friday, however, I could tell something was wrong. He was sad, lethargic, not very talkative and clearly couldn't get comfortable, no matter where he was. I tried some at home treatments, to no avail. After a trip to the emergency vet yesterday, it was clear we were facing more serious problems. Fate, it seems, had dealt the resilient little fella yet another blow: he had a urinary tract blockage. With his stage four renal failure, all those toxins were building up in his system, and he had no way to get them out of his body. The only solution was surgery to remove the blockage, and we couldn't be sure that he would survive the surgery, or that another blockage wouldn't occur after that and put us in the same, painful situation again. Plus, the blood tests indicated that even if we removed the blockage, his condition simply couldn't improve beyond what it was, and his quality of life wasn't going to get any better. Faced with him spending potentially his last days at the vet, undergoing and recovering from surgery in a cage in a strange place, or the possibility of his maladies worsening when I couldn't be there with him 24/7 to take care of him, I made the heartbreaking decision to let go.

He passed quickly, quietly and peacefully, purring all the while, in my arms. I'll miss him terribly. Goodbye, little fella.
Share |
Posted by Shan at 9:35 AM 6 comments

Places You Should Go