skip to main | skip to sidebar

Everyone has those actors that just grate on you. They may be talented. They may appear in shows you like and watch regularly. They may be a terrific person in real life. But for whatever reason, whenever they appear on the screen, they instantly make you want to change the channel.

For me, one of those actors is Eric Balfour.

He's been in programs that I like, such as Buffy, 24 and Six Feet Under. But there's just something about him, and his performances, that rubs me the wrong way.

So I was mildly aware of a new show coming up on SyFy called Haven, based on a Stephen King short story. In fact, I had it on my list of Summer TV Shows to Check Out. I hadn't heard any casting information on it, and last night, I was watching the season premiere of Warehouse 13 (great fun!), and saw a commercial for it. They showed the primary stars of the program, and lo and behold, there he was...Eric Balfour. I then tweeted this:

I was going to come home tonight and remove my season pass for Haven, and then this popped up on my twitter feed: 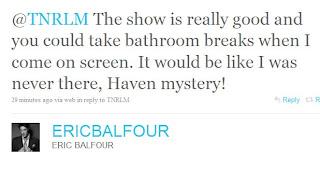 Now, this isn't a verified account, but at first glance, it appears authentic. I couldn't help but giggle at his response, and self-effacing good humor.

So you know what? I will not be deleting my Haven season pass. You've earned yourself a tune-in, Mr. Balfour, and a viewing with an open mind. Best of luck with the show.
Share |
Posted by Shan at 6:28 PM 2 comments

Places You Should Go